An Overview of San Francisco

San Francisco, officially the City and County of San Francisco, is the financial, cultural, and transportation center of the San Francisco Bay Area, a region of 7.5 million people which includes San Jose and Oakland. It is the most densely settled large city (population greater than 200,000) in the state of California and the second-most densely populated large city in the United States after New York City.

In 1776, colonists from Spain established a fort at the Golden Gate and a mission named for Francis of Assisi on the site. The California Gold Rush of 1849 propelled the city into a period of rapid growth, increasing the population in one year from 1,000 to 25,000, and thus transforming it into the largest city on the West Coast at the time. After three-quarters of the city was destroyed by the 1906 earthquake and fire, San Francisco was quickly rebuilt. During World War II, San Francisco was the port of embarkation for service members shipping out to the Pacific Theater. After the war, the confluence of returning servicemen, massive immigration, liberalizing attitudes, and other factors (Vietnam) led to the Summer of Love and the gay rights movement, cementing San Francisco as a center of liberal activism in the United States.

Today, San Francisco is one of the top tourist destinations in the world, ranking 33rd out of the 100 most visited cities worldwide, and is renowned for its chilly summer fog, steep rolling hills, eclectic mix of architecture, and its famous landmarks, including the Golden Gate Bridge, cable cars, and Chinatown. The city is also a principal banking and finance center, and the home to more than 30 international financial institutions, helping to make San Francisco rank eighteenth in the world’s top producing cities, eighth in the United States, and ninth place in the top twenty global financial centers. San Francisco has the 2nd highest per capita GDP in the United States after Washington, D.C.

The international character San Francisco has fostered since its founding is continued today by large numbers of immigrants from Asia and Latin America. With 39% of its residents born overseas, San Francisco has numerous neighborhoods filled with businesses and civic institutions catering to new arrivals. In particular, the arrival of many ethnic Chinese, which accelerated beginning in the 1970s, has complemented the long-established community historically based in Chinatown throughout the city and has transformed the annual Chinese New Year Parade into the largest event of its kind outside China.

The city’s large gay population has created and sustained a politically and culturally active community over many decades, developing a powerful presence in San Francisco’s civic life. The city hosts one of the largest and oldest pride parades

Homelessness has been a chronic and controversial problem for San Francisco since the early 1980s. The homeless population is estimated to be 13,500 with 6,500 living on the streets. The city is believed to have the highest number of homeless inhabitants per capita of any major U.S. city (source).

The state has the most Roman Catholics of any state, as well as large Protestant, non-religious, Jewish, and Muslim populations. California has the most Roman Catholics in the U.S., ahead of New York state. It also has the largest Mormon population outside of Utah. The state’s second largest group next to Christianity is the non-religious, which consists of atheists and agnostics. It is one of the fastest growing groups in the state (source). 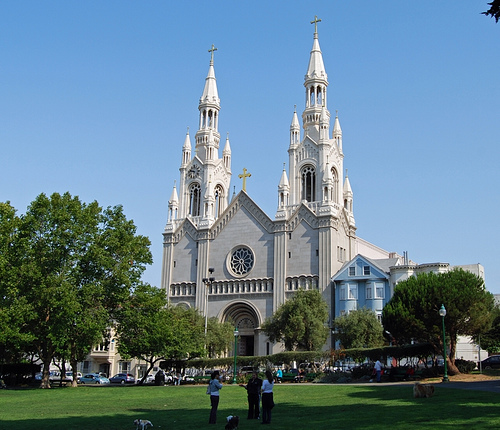